If you have created the game Bug Race - Intro you have a game where you control a beetle that runs around a track. The goal of the game is to stay on the track and if you don’t it is Game Over. But how do you win the game? And how can you add more players or add more levels? Here are suggestions on how to develop your project. You can pick one thing, all of them and add your own! 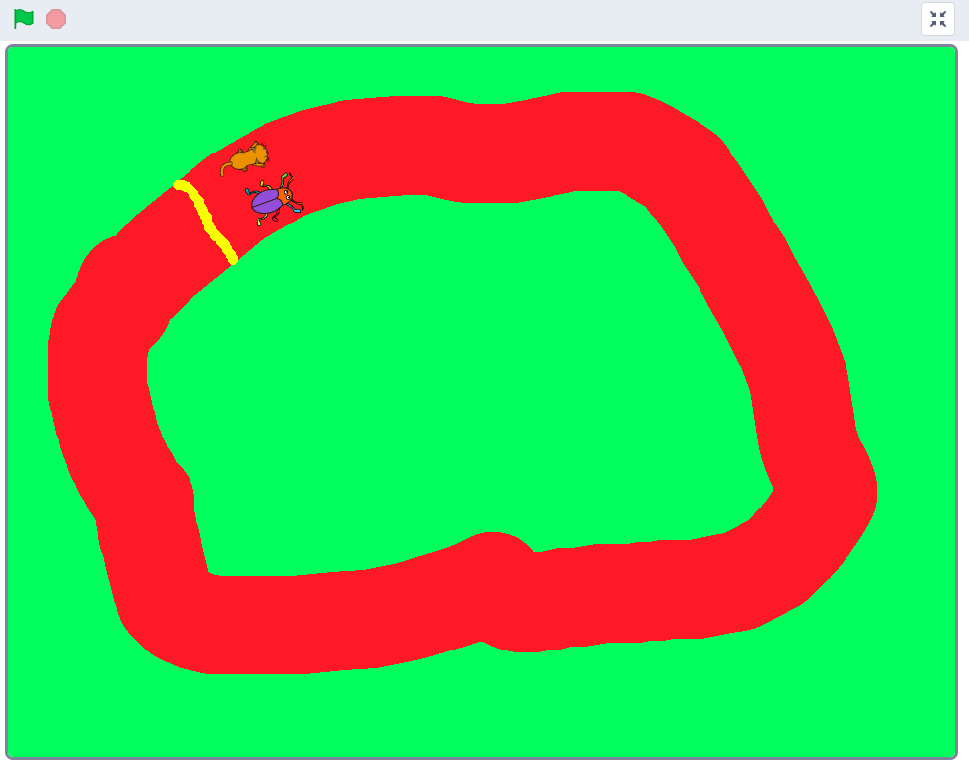 Click here to open Scratch in a new tab. You need to log in so that you can open your already made project "Bug Race – Intro", which you are now going to develop further.
Follow the step-by-step instructions. Each chapter that follows presents an idea for further development of your already made Bug Race game. Choose between the ideas and code them into your project.

Note! Remember that you can look back at the previous instructions of Bug Race - Intro (English) if you can’t remember how to code certain scripts.

1: Add a finish line to win the game

With a finish line on the track you can code a script that says that you win the game when the beetle crosses it. The code is similar to the script you created in Bug Race to show Game Over when the beetle runs off the track. To code the finish line, follow these steps: 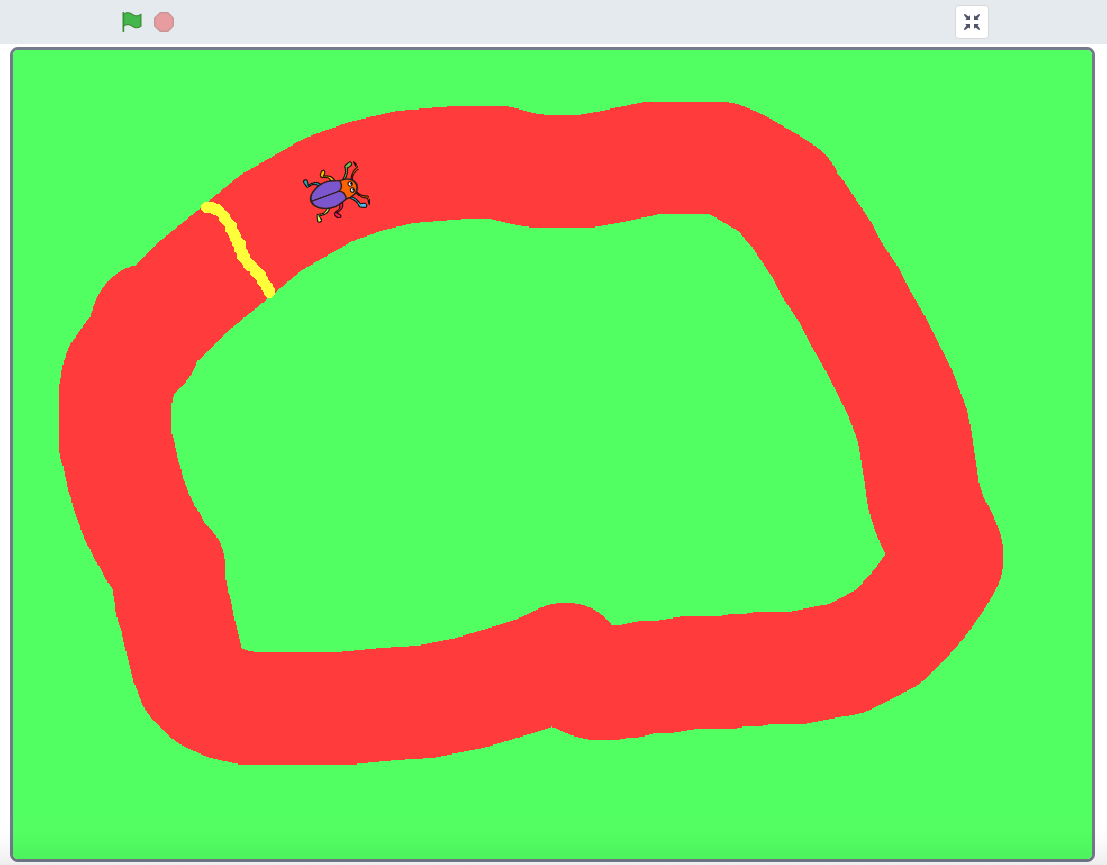 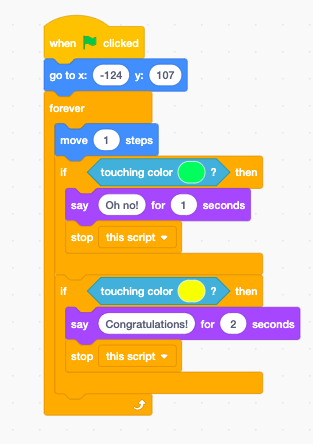 Now you've created the script for the finish line. On the next page you can add more players.

You have a game for one player. But it can be fun to play against someone else – or play with two hands! If the track is wide enough, you can add a beetle or other animal and let them compete against each other for who crosses the finish line first.

Test your game! Can you control both sprites? But what happens when one of them ends up off the track? 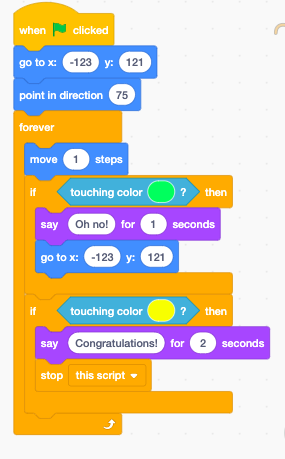 Note! If a sprite says "Congratulation!" too early you’ve detected a bug. It may be because part of your sprite is the same color as the finishing line. Debug, by changing colors.

Now you have two players and perhaps you want to create a maze of your track – check out the next page.

3: Change the track to a maze

Since the script for the sprites only detects if they are moving in green, and not what the track itself looks like, it is easy to replace the track. For example, you can make a maze as a backdrop instead. 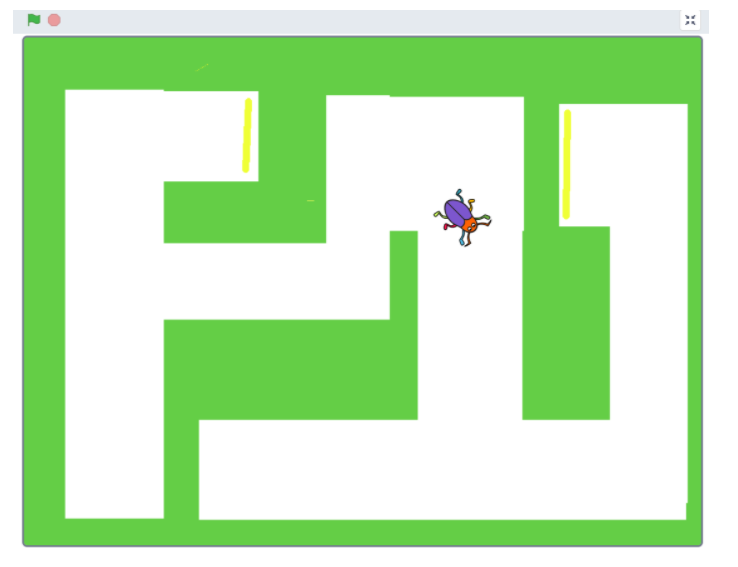 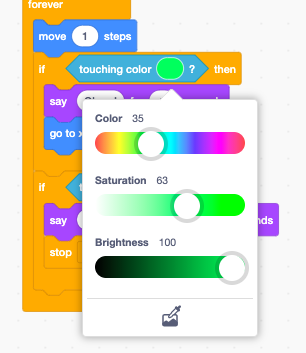 Note!: Make several different backdrops and see which is the most fun to play!

You have now created a new track. On the next page, you can adjust your steering so that it is smoother to navigate the sprites.

You may have noticed that it can be difficult to control the sprite when you play. It turns a certain number of degrees every time to press the key, but nothing happens if you hold it down…until after a while when it starts spinning really fast! This is the "ketchup effect." It can happen when writing text as well. Test in a box where you can type text, such as at the top of the internet browser where Scratch is open. If you press "a" on the keyboard, first one a will appear, then nothing – and then a whole row of ‘a’ very fast.

For each "letter" that the computer receives, the Event "When [a] is pressed" will be sent, and the small script that rotates the sprite will be executed. That's where the "ketchup effect" comes from. 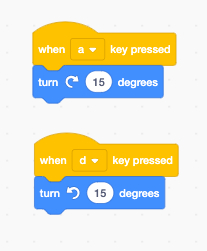 But there are other ways for Scratch to read the keyboard. Under "Sensing" there is a condition called "key [space] pressed?".

You can use it in an "If" block (which you find under "Control") to make the sprite turn just a little when a certain button is pressed (you can change [Space] to any key).

Where do you place the "If" block? Well, if you put it in the same place that moves the sprite forward all the time it will turn a little bit for each step when the button you have selected is pressed. You will have a softer turn.

Try different values for how many degrees it should turn! And, don’t forget to remove the other scripts that turn the sprite!

Congratulations, you have enhanced your Bug race.

Don't forget to save your project! Rename it so that it is easy to find again. Test your project and if you press SHARE other people in Scratch will be able to test your game.

Here is a challenge is you want to continue:

Can you create scripts that change the backdrops of the stage when a player reaches the finish line – it will be like leveling up to new courses!